I wrote this short story for 'The Wrap' section of the Ottawa Citizen newspaper; I am told it will be published sometime in the New Year. 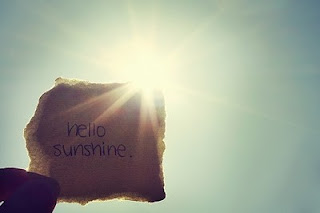 “What else would you like, Sweetie?” asked Mom over the phone. She sounded excited: it’s been six years since Irene moved away. Six years since they’ve only seen each other in emailed pictures and Internet video calls.

“Apple pie, Mom!” replied Irene. “With walnuts and cinnamon” she added. She was looking forward taking a break from being the responsible, serious adult, and becoming a child again for two weeks.

“What about you? What would you like from Canada?”

“Maple candies, of course” Mom and Dad replied in unison.

September in Eastern Europe can be rainy or sunny. You never know. When she arrived at the airport, the weather was cool, crisp, with a bright golden sun against a spotless blue sky. The trees were starting to loose their leaves, and the remaining ones were rusting fast. Irene was a tall, statuesque woman, and the way she wore her hair, clothes and jewellery – long, brown wavy hair; long, draped tunics and cardigans; large necklaces and earrings – she resembled a Greek goddess. She looked and sounded, like her friend Lee once said, “larger than life”. Irene’s eyes were moist, honey-brown, and very expressive – betraying her mood at all times, making it impossible for her to lie.

“It rained until yesterday” announced Mom. “This is the first sunny day we are having in ten days” added Dad.

Three days in the city, catching up with old friends and places, were followed by a week in the mountains. Hiking with her parents was a slow-paced adventure; their walk was filled with chit-chat and the occasional snack stop, sitting on a fallen pine-tree trunk. The sunlight was lazily filtering through treetops, playing with light and shadows on the grass. Moments of silence in conversation brought up into awareness the soft hum of a stream and the sound of cow bells from a distance. The air was filled with the fragrance of fir and pine resin.

The rain returned the day Irene was leaving, with the first shy drops washing the car’s windshield on the way to the airport. It was the same as a few years ago, when visiting Vancouver: one sunny week in April, with showers before her arrival and after her departure.

Up in the air, Irene was watching from her window seat as the land shrunk and disappeared behind a layer of white, fluffy clouds. She mused over this weather thing, wondering whether this was a coincidence or serendipity. Whenever she had been camping or traveling for holidays, the weather was always sunny. At other times, it would be pouring rain or slushy or muddy, like the times when she traveled often for work. A few years back, Irene had been miserably in her work: too much office politics and too much pressure; too little autonomy and too little meaning to her tasks. What is it, she wondered, that consistently brings sunny weather during vacation, and rain during work-related travel that I dislike?

“What makes you think we are a good match?” asked Irene. Somehow Josie’s description of Larry resonated with something inside Irene. Her stomach was tight, as if clenched in an ice-cold claw, and for a brief moment there was pain in her heart, sharp like a knife.

“He is a serious man, Irene” replied Josie, with enough seriousness of her own to illustrate her description of the man. “Larry is not playing games or breaking hearts. He is a family man, with values, and a good provider.” Josie took a sip of her coffee, her eyes not leaving the sight of Irene’s face.


………..............................……X……………….................….
It took no more than three minutes for Irene to walk from her car to the restaurant where she was meeting Larry; but it was long enough for the wind to turn her umbrella upside down, and for her shoes and socks to get soaking wet. Her eyeglasses were wet, and as soon as she stepped inside the warm diner, the lenses were covered with steam, rendering her awkwardly blind. Larry, a short, stocky man with an old-fashioned hair cut and an old-fashioned brown suit, was already eating soup. When he noticed Irene he stood up, shook her hand and excused himself for having already ordered food. “I have to eat often…” he explained; “it’s for the blood sugar”.

It rained all week, and Irene bought a new umbrella. On Saturday morning she went to her yoga class, where, for most of the time, she managed to not think of the week that passed, and the week that was coming. “Here and now” she kept thinking as she caught her thoughts wandering. After the class, as she was stepping out of the gym hall into the hallway, a hand touched her shoulder.

“Hey! You forgot this!”. Irene looked over her shoulder to see a man dangling a water bottle in his hand. “I know it’s yours”, the man said; “I used it as my focal point during the Tree Pose”.

“Did it work?” asked Irene, humorously, taking the bottle from the man’s hand.

“No” he replied, also with humour and a playful half-smile. “You kicked it once and I lost my balance”

They both laughed and walked very, very slowly down the long hallway of the fitness center. The man’s name was Steve, and he was a head taller than Irene, with olive skin complexion and dark, sparkly, kind eyes. His body was medium built – not quite athletic, but firm and with good posture. He had a receding hairline; his salt-and-pepper hair was cut short. When speaking to Irene, he leaned forward, and when he listened to her, he nodded often, looking in her eyes. Irene became witty talking with him, as if her best of humour and intelligence came forth all of a sudden.


“Listen” said Steve, keeping the exit door open for Irene; “When you run out of the water in your bottle, why don’t I buy you another one to replace it, and maybe some dinner to go with it…say, tonight, or tomorrow night?”
Irene laughed, and both her voice and eyes said “Yes”. She felt a flow of warm energy running through her body, up her spine, down her arms and legs; she felt tall, and breathed deeply, her chest soft, open and light. Her hands and feet tingled as she gave Steve her phone number. 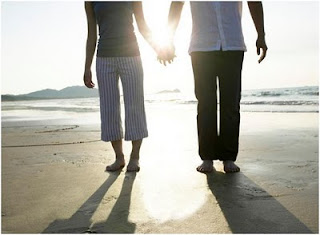 Outside, in the open air, the autumn day shimmered in gold and burgundy: the heavy rain clouds had dissipated, leaving behind them a clear, bright blue sky with golden, warm and luminous sunny weather.
Posted by Tana Saler at 4:39 PM